How I made an abandoned space station

If you find this site helpful, consider my Patreon Page.

Hi, I entered the abandoned space station challenge on cgboost.com and this is my entry. 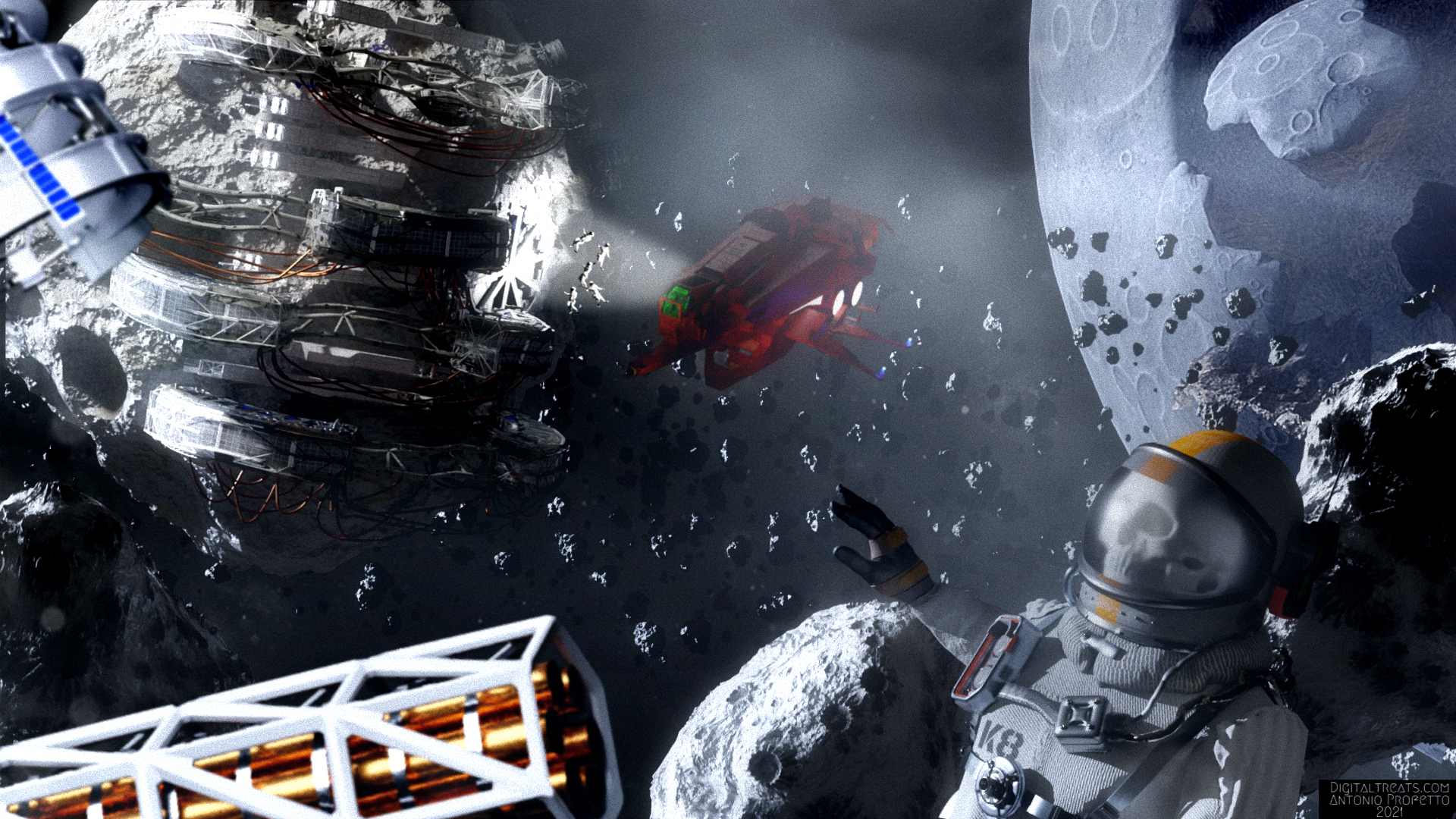 First I Used Reference from google on asteroids and space stations.  Second I had several assets already like the space station parts, and copied them into my project folder. Third I built the assets I didn't have like the planet, asteroids and debris.  Fourth was laying all the pieces together and playing with size and relationships of objects.  Fifth was lighting, which I had a lot of trouble with. Blender wasn't doing what I expected, especially with the sun light object.  Compositing the whole thing together and playing with the layout, and integrating all the layers into a cohesive whole was just as important as making the elements in blender.

The digitaltreats home page describes how to think about what you need in the shot.

I wanted several things to tell the story of a derelict space station.

I decided I needed, A damaged space station, a shattered planet, asteroids, dead astronauts, a salvage ship and debris.

Then once I made or aquired the parts, I started to put them together in the scene.  I first had the planet as very small, which looked only ok.  So I resized it. 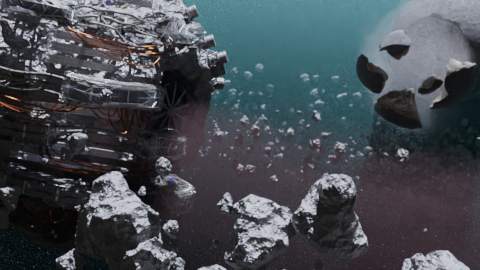 Then I put the asteroids in, then the station, then the ship with the spotlight, then the astronauts, and the foreground elements.

I looked at several tutorials on how to do this. And tried to figure out how to make the things I couldn't find.

The shattered planet islands I made using boolean objects.  I might make a tutorial out of how I did that.

So when making things I didn't know where to get, I used several tutorials to do this:

How to make a space scene

How to make a planet in Space to make the planet.  Well, I used a simple sphere and a texture from blender kit.

How to make asteroids  I tried them and settled on making the asteroid by sculpting the main ones.  The procedural ones were more difficult to master.
I find it hard to remember what nodes to use for what purpose.  For example how to place craters?  A lot of tutorials use voronoi texture with an rgb curve with points in the shape of the crater rim.

How to make Cables I didn't know making cables was easy.  Add them to your scenes.  Try to make ribbed ones, different color ones, metal ones.

GeometryNodes for the background asteroid fields.

Compositing To put the shot together without re rendering the fog every time.

Collections to use the render layers correctly, and to organize your shot.

For the ship cockpit, I used a single plane emissive, with a picture of a ship interior.

I used lower res asteroids for the geometry nodes.  I used the rock generator built into blender.

Here are some mock ups I did while first thinking about what to do.  I think if I had enough memory the shot would of come out better.  When I did this I thought an abandoned space station might look prestine because its space.  No rust.   So I scrapped the idea I had in this image. And built a non destroyed version, but used lattice to deform the girders and meshes a little.   I liked the fog and the geometry node asteroids in this one a little better than what I submitted, but some how blender got really flaky when I started to run out of memory, and I had to composite the shot which made me deal with other issues.  In the end I think blender needs some love in the compositing areas.   Especially in work flow. 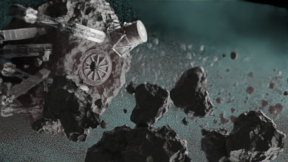 Another idea I tried using geometry nodes for this.  First time using that so the image has a uniform amount.  Then I learned how to weight paint the geometry nodes.  Also these were made by Daniel Grove so the rules were you couldn't use 20% of a third party asset.  (these look great though) 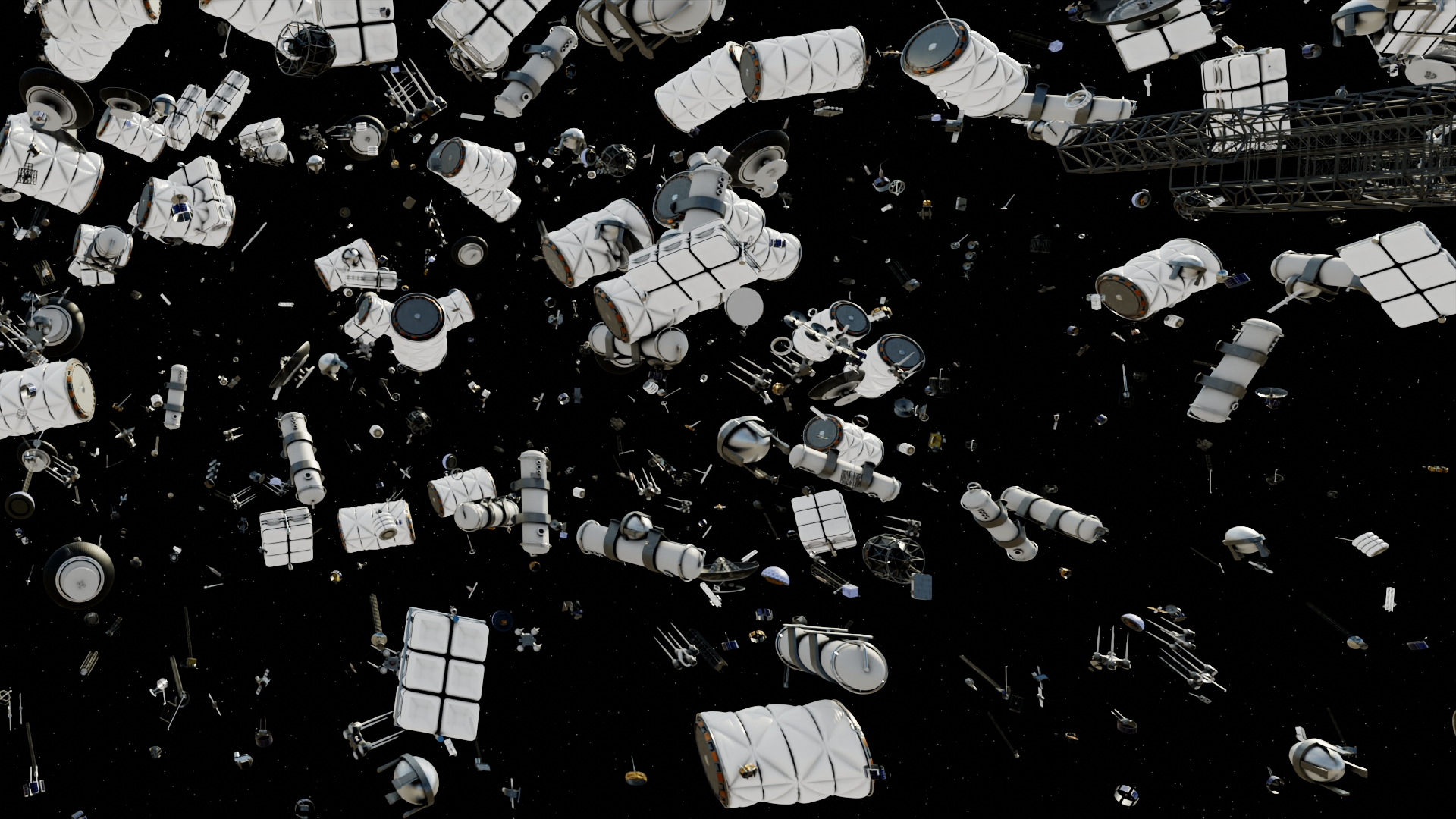 Here is another test of geometry nodes.  I eventually used asteroids instead, 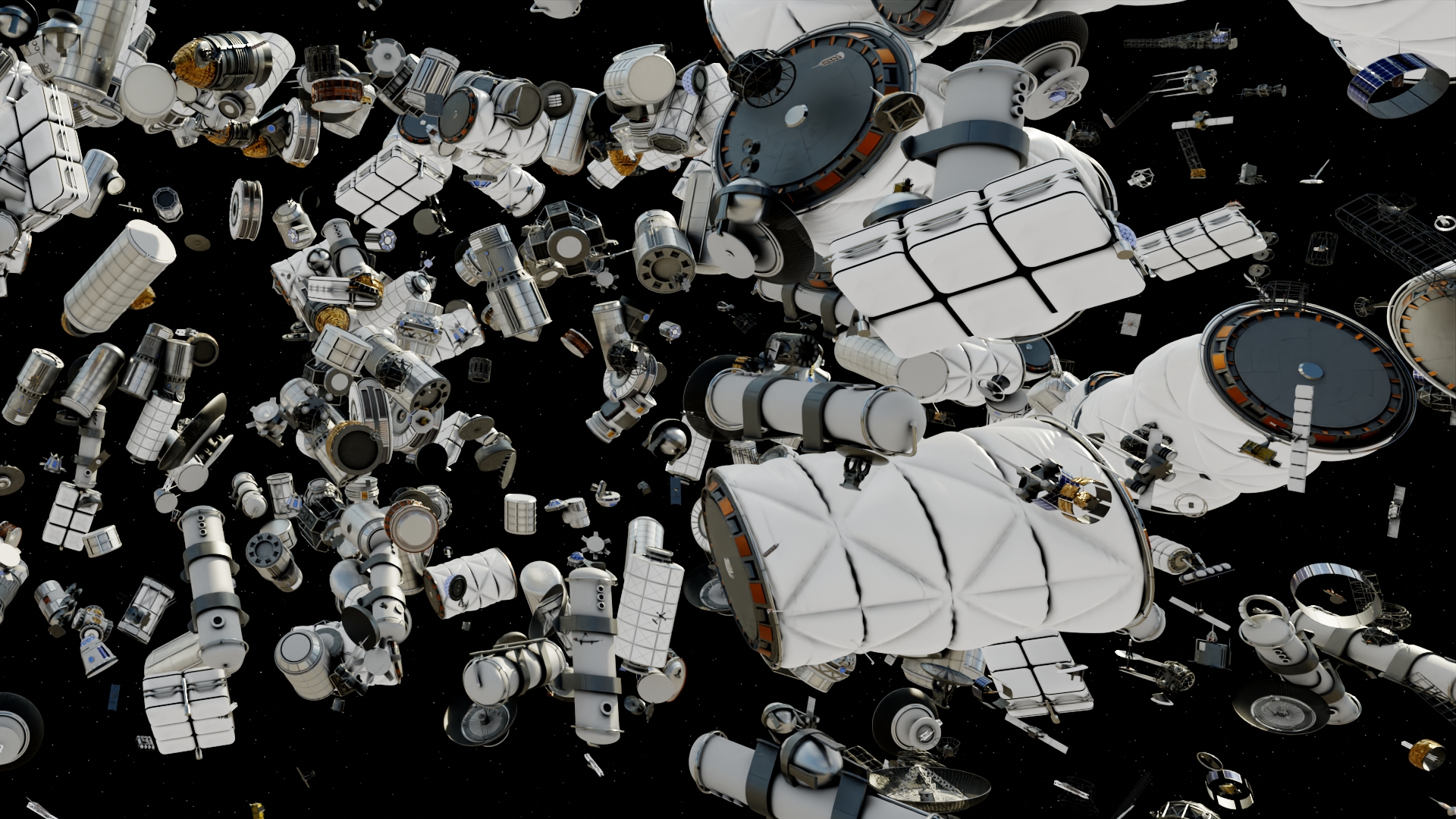 Here is a test I did using three vertical planes each one with smaller or more amount of asteroids.  big Med small for depth. Maybe they will build in a level of detail node into the geometry nodes. That would be awesome.   As it was this feature sluggified my laptop  which isn't that powerful, an i5 with a 1650 nvidia and 16 gigs of ram.  So I kept the eyeball icon off most of the time. But renders were quick. Except for the Volumetrics.  Something I wanted in the shot, but took a long time to render.  I used Blender 2.93. 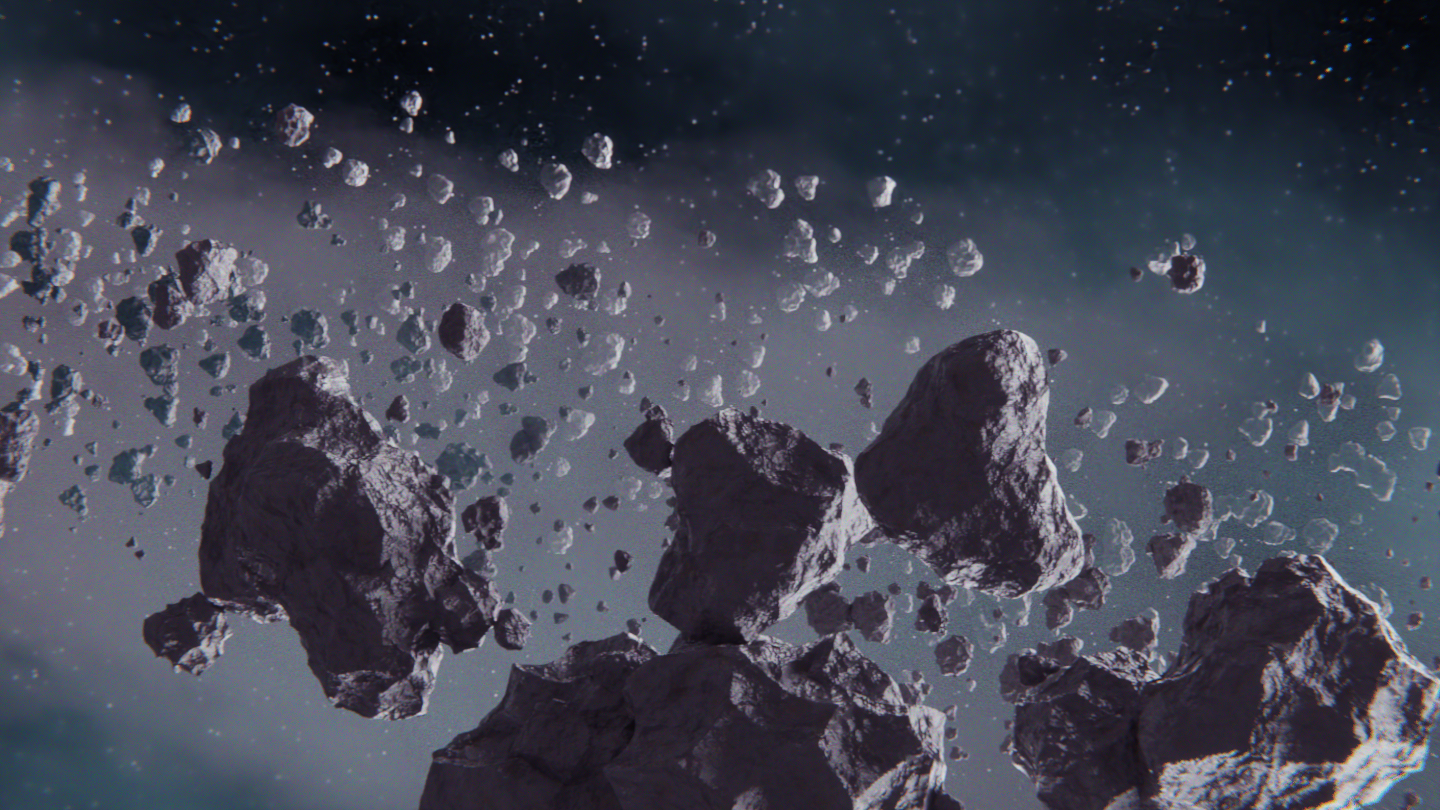 This was the first test based on a tutorial of doing a procedural asteroid.  Didn't have that asteroid feel.  Couldn't get those good looking craters. 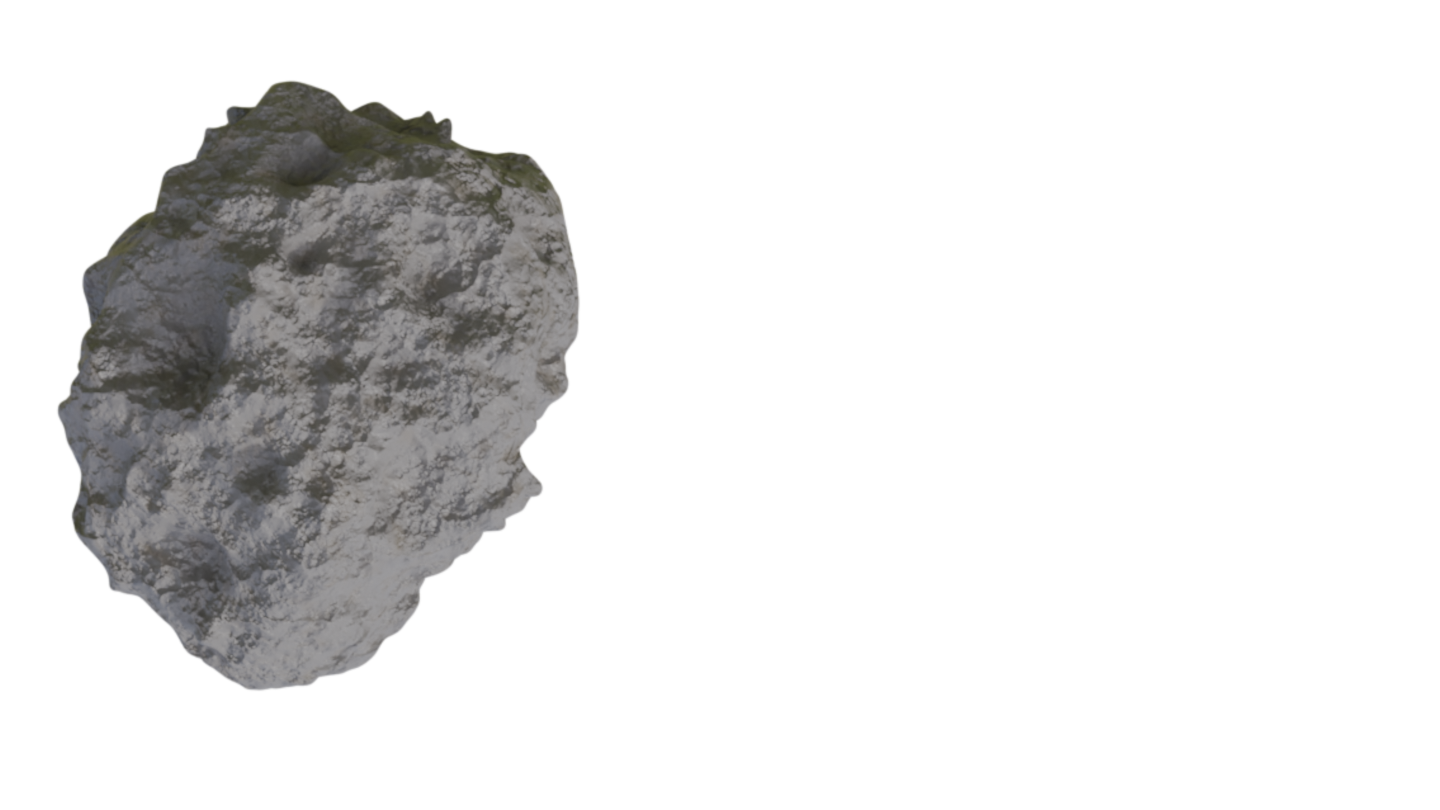 These asteroids were a little better and were modeled by sculpting the craters. I combined what I learned on several asteroid tutorials to do this, a combo of sculpting and procedural, and image maps.  I ran out of time to redo these.  There was a nice crater brush on blender kit. 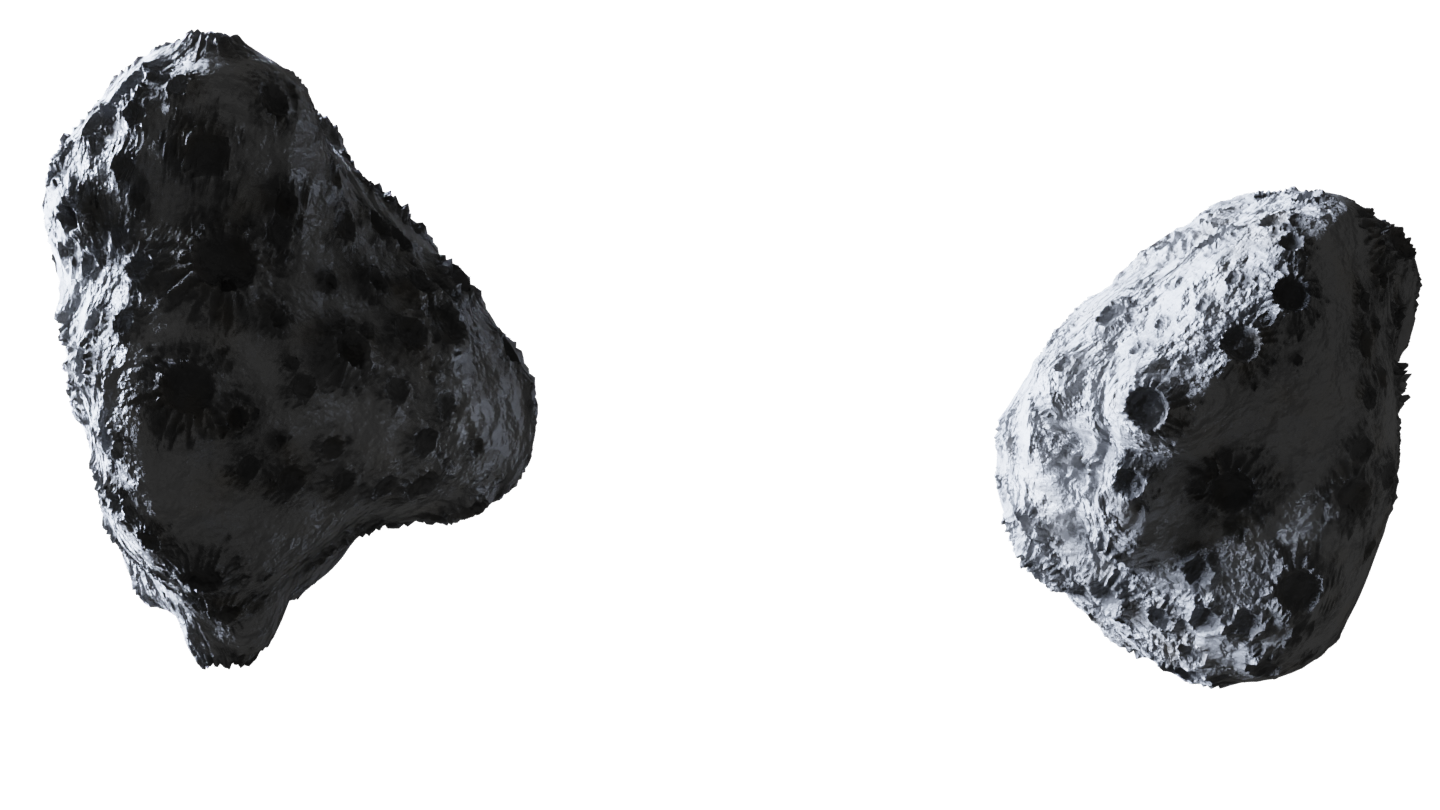 I tried to render out the astronauts but I wasn't able to get them into the shot properly in the compositing process.  Here they look great, but In the main shot, they were blending in with the background to much. 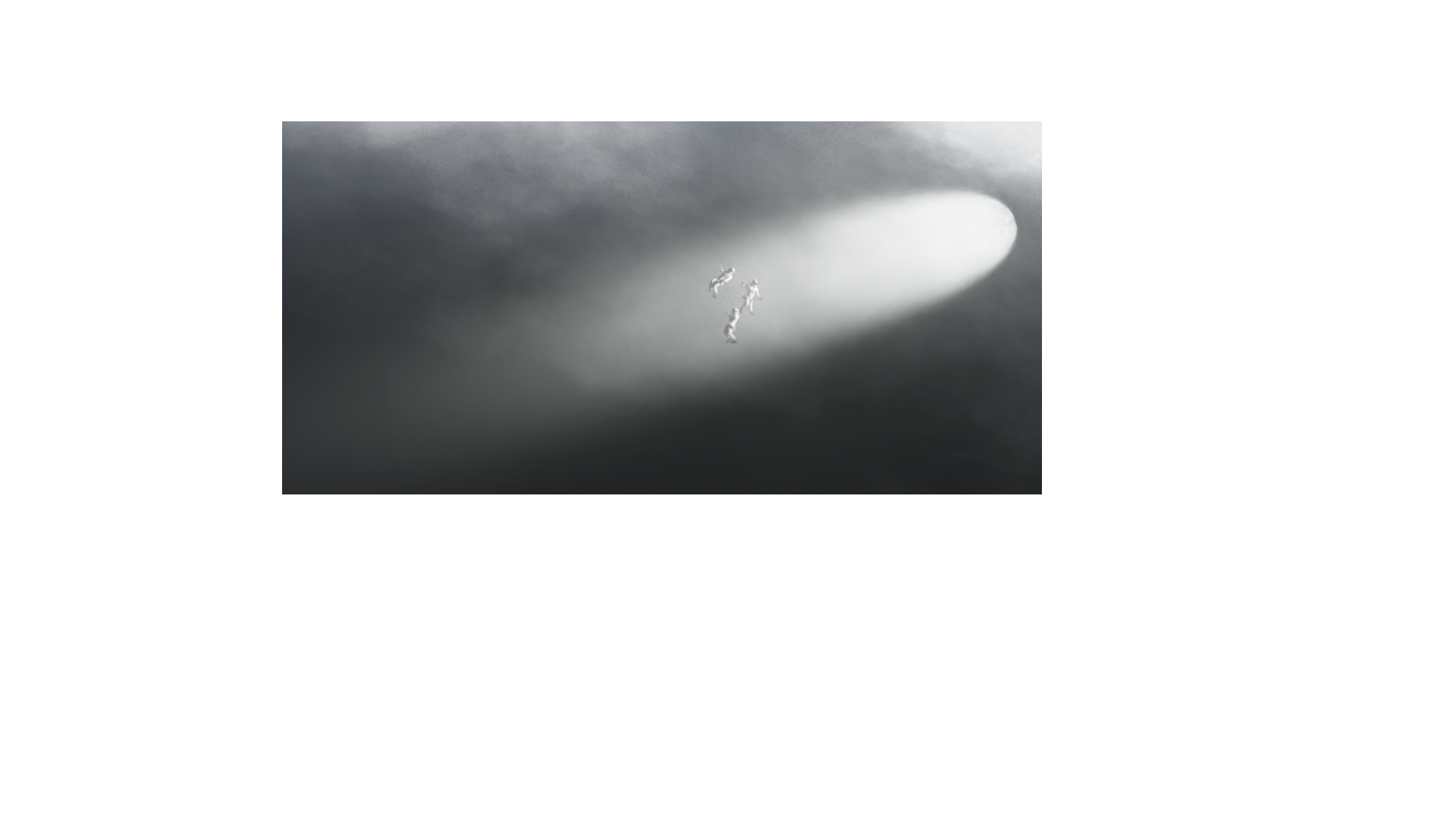 Before compositing,  The spot light was a problem cause the astronauts weren't showing up because they were being over lit as white, so the volumetric fog was white too, so That was an issue.  Also readability of the space ship was bad, so I changed the color of the ship and relit it as best I could.  Darker on the right side might of been better in the final shot.   I saw another entry where the sunrise was behind the planet, that would of been a good choice to highlight the ship and asteroids, a nebula. 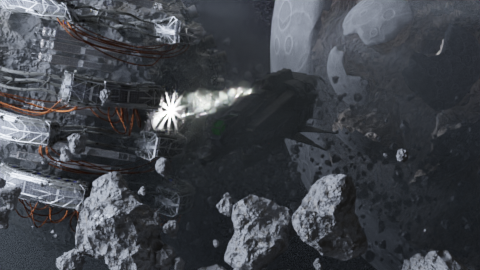 I had considered ice asteroids but couldn't because I don't have a proper system yet.  And this doesn't actually look like an asteroid. My skills, my skills, trying to get better.

Here is some debris that sorta part of was composited into the shot.   The final was a little busy looking so I limited this to only part of it showing in the finial. 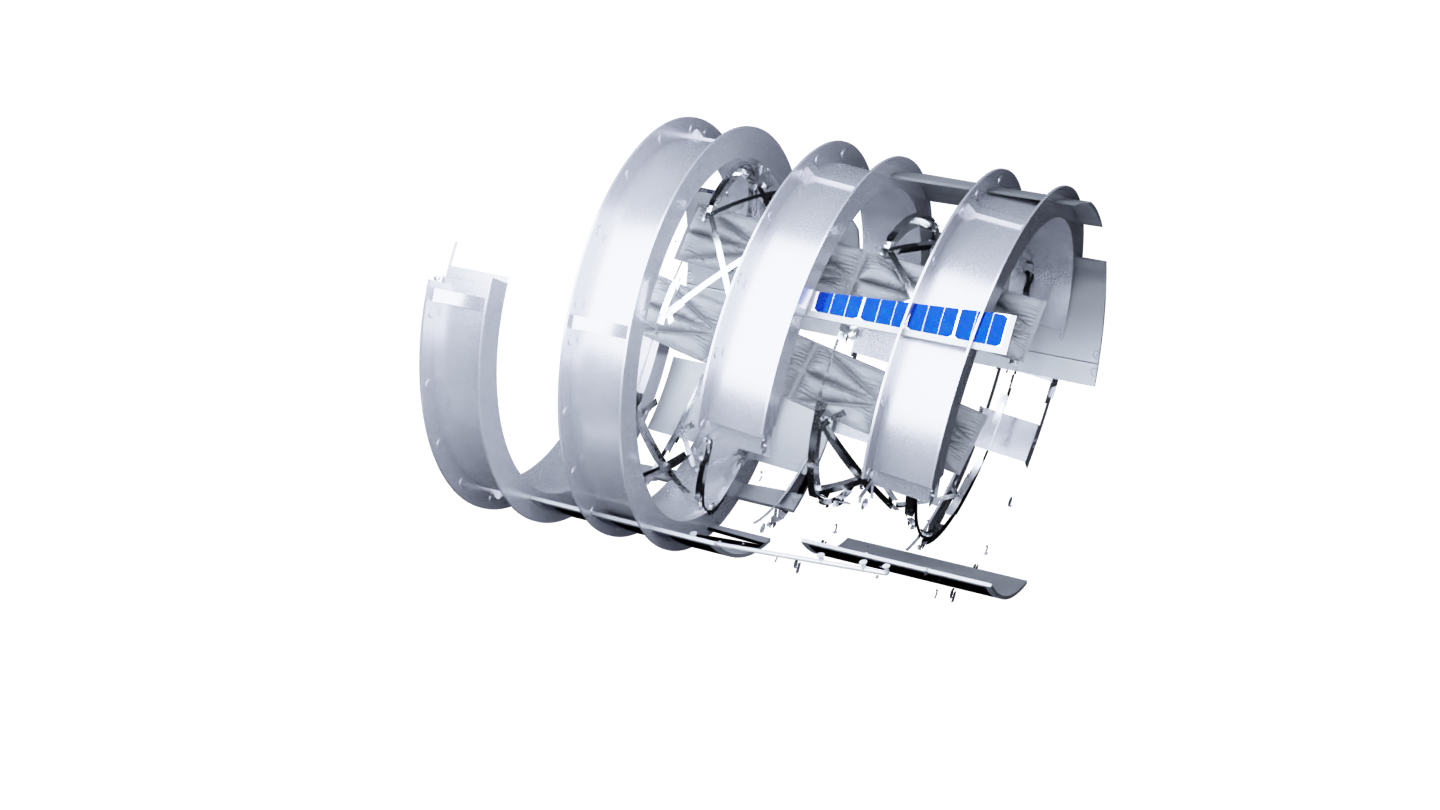 If you'd like to see more CG Recipes - Please consider becoming a Pateron, Click on the link below.  Thanks for following along with us.

3d Total
3 weeks 1 day ago
Foundry have released a video covering the features of Flix 6.4.

3d Total
7 months ago
Check out Rodeo FX's breakdown for Shang-Chi and the Legend of the Ten Rings.

iPad app CozyBlanket puts the fun back into retopology

3d Total
3 weeks 1 day ago
Here is another @leledoesdoodles DTIY challenge from Instagram, I really like her style and I tried to push this one even further. I sculpted the character mesh in ZBrush reusing some old meshes, then retopo and tweaked everything in Maya. For the clothes I used marvelous designer, ZRemesher and Maya. (I built a small tool to transfer the retopology and UVs in Maya). The character was rigged in Maya and tweaked after posing. Textures were done in Substance Painter and rendered in Arnold. Hair was done with XGen. I hope you like it, Cheers!

3d Total
4 months 2 weeks ago
This video shows how the color operations tool works in 3DCoat.

Moon Knight - Behind The Scenes of Khonshu vs Ammit

3d Total
3 weeks 1 day ago
Marvel go behind the scenes of the action sequences from the Moon Knight series.

3d Total
6 months 2 weeks ago
Check out Mackevision's VFX for the first season of Foundation.