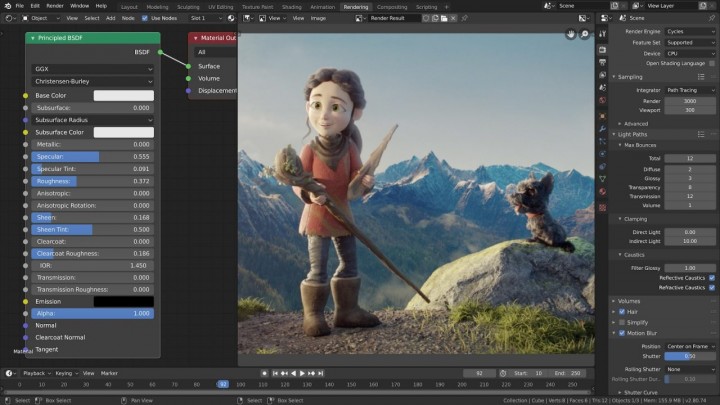 Hi my name is Antonio, and I've created digitaltreats.com as a way for me to organize what I learned with blender.  You might find the website beneficial also. I try to post videos that were full of great tips. But sometimes you think, in which video did I see that. (With so many videos on YouTube, it was hard to remember where I saw that tip.)  I thought maybe if I write down what I thought was great and organize what I found helpful, I could use the search function and organization of a website to find those tips. I post all the things I find helpful when creating Cool Computer Graphics.

1.  There are several Procedures to CG, composing a scene, and rendering the scene or animation. For this you need to get a fast computer.  Either a laptop or a desktop. To note desktops are more powerful and are better suited for Computer Graphics.  Today's laptops are very fast, But the size of the laptop means smaller graphics cards and other components.

As of May 2021 Cpus like the  i7 or i9 Intel processor, or Amd Ryzen Zen 3 5000 series 5600x or 5800x Processors are the best Price per performance.  Modern processors have cores that help with the work loads the computer handles.  (Some are 3 times as expensive than say an i9) Amd has the 5900x series also priced similar to i9.  The more cores the better.  Look for the most cores you can afford on a processor.  Some Intel models have 6 or 8 or 10 cores. Some Amd models have 6 to 64 cores.  Make sure you find out before you buy one.  Make sure you also get 32gb or 64gb of ram, and a fast graphics card.  I recommend Nvidia 3060 or above. Nvidia makes video cards for creative people too that again have more cores and can handle bigger scenes.  So try to get a graphics card with as much Vram as possible.)  (Amd has a cpu called Threadripper that has 32 and one with 64 cores and renders scenes out very fast.)  In the future, it looks like most cpus will have many cores and high ghz, allowing you to work and render on your workstation efficiently on either task.  An alternative is a render farm (several computers that render your scenes).  Some are online or you can make one yourself.   (This is an expensive option, but if you have spare computers around the house, Blender has a render farm plugin or App)  There is also a free online render farm.  One way to figure out what computer is fast enough is to look at the Cine Bench benchmarks on the web. You can get a good idea of how fast each processor is with this. You can read about render farms here.  Be sure to look at multi-threaded scores for an idea of how fast the cpu renders, and single core scores for an idea of how fast the computer would be creating a scene. Single Thread isn't as important, as a good gpu which in the case of a nvidia 3060 can display faster than the cpu.  A new feature of Blender is that it can use both, rendering with the cpu and gpu.

2.   Get a Mac or Windows?  Well, most 3d programs are on the Windows.  But if you get a mac, you can dual boot, meaning you can boot up in windows or mac?  Just get a Windows license key, (from Ebay?)  I got one for my son's computer from Ebay for 30$. Oem though.  Apple is hinting at making 8 core CPUs also, look for the m2 chips in an apple later this year.

3.   Get your 3d software.   Blender3d at blender.org is awesome and free (Looks like Maya).  3d software like Maya, 3d Studio Max, Cinema 4d, and Lightwave you pay for and are also excellent 3d software.

4.   Read the blender docs, and then Go to You tube and watch the blender tutorials.  This site has links to what I thought were good Tutorials. The menu is setup to watch Youtube videos in a Curated order.  It's important to note that learning 3d art is hard, but easier today than it has ever been thanks to better software and youtube.  You have to know quite a bit about computer software and art.  The thing though is you also need a good eye for composition.  Every image you make should tell a story. And every image should be composed so your eye is directed to the main subjects.  That's the secret to good cg and mediocre cg.  Start off by copying what you think is awesome. Take notes on why.

5.   Get organized.  Start off with beginner tutorials, then intermediate, then Think about Paid tutorials for specific aspects of the art you want to do.  Keep a journal of what tutorials you've done so you can go back to one if you forget something.  Write down the name of the tutorial and what you learned.

6.   Get plugins.  The plugin architecture in Blender is awesome as well.   Plugins extend the functions of Blender and or make things easier to do. That's a good way to support the blender community also. Plugins save you time.

8.    Make sure to get lots of reference materials to help you figure out your 3d image.

9.    Save your work often and have an external drive to back up your work, every day, you never know if or when your hard drive might have an error or worse.

10.  Post your art work to places like Deviantart.com or Artstation.com   where other people can see your art and maybe critique it.  Helps you grow.

11.  Try to do contests from Cgchannel or CGboost or wherever you can find one.  That helps focus you and helps you practice your 3d. You might win a prize too. The deadline helps you focus on time management.

11.  Think of ways to make money doing what you love.  Some people make and sell 3d objects.  Some work for cg companies like Pixar, or Bluesky.  Some make Youtube tutorials. Some are freelancers or start their own companies. Some people make Animated shorts or movies.  Cg has never been so accessible to normal people.

One of my favorite places to start learning Blender is cgboost.com.

3d Total
9 months 2 weeks ago
Check out this breakdown of an apocalyptic city done in After Effects with ActionVFX elements.

3d Total
1 year 1 month ago
A goblin infiltrates the enemy team in this trailer for Clash Royale.

All of the Substance 3D tools are now free to students

House of the Dragon - Trailer

3d Total
4 months ago
Check out this trailer for HBO's upcoming House of the Dragon series.

My Dad The Bounty Hunter - Teaser

3d Total
3 days 8 hours ago
Netflix have posted this teaser for My Dad The Bounty Hunter.

The Christmas of The Little Snowmen – part 3

3d Total
10 months 1 week ago
Osmar Rivera takes us through the process for creating an illustration based on the snowmen, the forgotten character of the winter season, using Blender.

The School for Good and Evil - VFX by Image Engine

3d Total
9 hours 7 minutes ago
Image Engine have posted a VFX breakdown for The School for Good and Evil.

The World is on Netflix - Commercial

3d Total
1 year 3 months ago
The universe is watching in this commercial for Netflix.