Composition Tips What you do before you open Blender

You can get blender at www.blender.org

Make sure every image tells a story. Plan your image so that even a static image tells a story.  It could be as simple as a person holding a toothbrush and looking at his teeth in the mirror.  Or as complex as an two army's facing each other.  Norman Rockwell, a master artist excelled at this.  His pictures are famous because people were able to relate to his image's stories.

To quote Norman Rockwell, "On the whole it is far better to get a really good idea right at the start and stick to it rather closely than to flounder around with a second rate one, hoping that by some good fortune it can be improved. A poor idea at the beginning is almost certain to prove a flop in the end. And always the illustrator's work should proceed in accordance with a well thought out plan. A haphazard approach is practically certain to result in failure.  Yet some young illustrators foolishly start work at once upon their canvas, blindly trusting to some kind providence to guide the arm.  The canvas shouldn't be touched until one knows exactly what he wants to put on it and how."

This holds true today, except today most people are using a digital canvas. Serendipitous spontaneous drawing can also be fun to get those good ideas.

Maybe some people in a scene react to the main subject of the Image.  Some might be indifferent or going about their own business, some might be astonished, some might have some expression that helps the story of the image.  In some of his images, you notice several parts of the image that told a story and if that part wasn't there the viewer might not get what the artist had in mind. 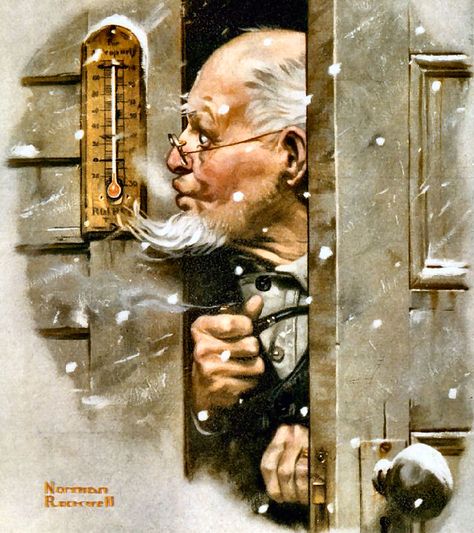 The thermometer, cold breath, and snow all show that it's cold.  The story is the man is checking the temperature or wondering what the temperature is and the picture needs those references to the cold.

The below tips are a summary of some youtube videos and of the Critique tutorials from cgboost.com below.  Read these, and then watch the videos.  You'll be a better artist if you do.

Check your image levels.  Tweak so black and white indicators to where there are actual values, Modify so the image pops better.

Lighting.  Make sure objects in the scene support the lighting direction, for mood.

Like a stage in a show has all the lights focused on the main characters your image should be bright where the main character is, and slightly darker in other areas to help accentuate or make your eye look at the main character first, if that's your goal, or maybe the opposite to tell a different aspect of the story of the image.

For balance, Correct the size of objects in the composition for readability, and story telling.

Tilt objects in an  image to add a feeling of direction of where objects are going and or relationships to other objects in the image.

Remove objects that don't help tell the story of the image.

Add objects that support the story for better readability.

Add in an object that might give the main subject a purpose in the image, to help with story telling.

Add glows and lighting to separate objects from the background for more readability, especially if the objects are similar colors, lighting will differentiate between them, and can also establish mood.

Add in foreground objects only if that helps tell the story. An example is a man waving in a helicopter a landing area.  If you make the helicopter bigger in relation to a man in the foreground, then the helicopter is the main focus of the story of that image.  If the man is bigger, then that makes that person have more weight in the image.   An equal of similar size means they both have equal importance.  (That doesn't help tell a story in most cases)  Sometimes the size of objects are just to direct the eye from one to another part of the image for storytelling.  If this is the case a small object that is bright in color or that makes you look at that part of the image (and hopefully tells you about that part of the story in the image)   while the main focus your eye travels to is the main part of the story, usually the bigger object.

When looking at an idea you drew or thought of Sometimes cropping an image helps remove parts that are dead space, so you can focus on the part of the image that is important.

The first part of an image you look at should tell you what the image is about immediately, and where your eyes look next should help tell a story.  If you do the opposite the image will have a very different feel, like a mystery. If not done correctly the image won't be inspiring or dynamic.

Lines in the image help guide the eyes to the characters.  So horizon lines, building lines, etc guide the eye to the subject.

Move objects to an area in the composition that doesn't block other objects so you can read the main object and then  also read the object that was  behind that one.  If an object blocks another object only do so if that adds to the story of the image.  To help focus where the eye focuses on.

Keep styles in the image similar.  Cartoony objects or realistic

To make an image look more cozy add framing elements, like trees in a forest. Or to tell a different story,  the design of the enemy monsters in a scene where the main character is surrounded helps frame the image and guide your eye.

If the image has a lot of noise, simplify complicated parts of the image,, Then the eye can focus on the story of the image,  moving from one part  to the next. Try to ground an image.  Follow the rule of thirds.

Here is a great video on visual language.

Cg Guru has a great understanding of what makes a good image as well.

This article below helps further this concept

Below are several Youtube videos from cgboost that are excellent examples of how to make your images tell a story.  (Zack from cgboost.com is a genius)
His insights show you what you need to be thinking to be a successful artist.

Cgboost Zack shows how to make peoples artwork much much better.

Cgboost Zack goes over images and highlights what makes a great image, (hint it tells a story) He also talks about composition

This next youtube is in Aftereffects, butThis is what happens when you plan your shot with vfx in mind.  He's thinking like a director. He shot the film part, knowing what he needed to make the shot. He also didn't add random things, they were all parts of the story. He added a car alarm sound so you think, the landing was powerful enough to set off a car alarm, the glass breaking, the table tipping over. So this goes back to that cgboost people that every image tells a story, and you need to add elements that convey what happened. So that's the secret to a good shot.  But the thing that was important was he describes why he added the components to the shot.  Glass breaking, the items falling, the car alarm audio, the dust and wormhole thing.   All the items he added helped make the shot more believable.  Just like the ideas above apply to a single image, so to to an animated shot.

Here is such an awesome website to learn 3d.  I would read this Chris's website to learn how to light scenes, and compose shots and what he learned as a 3d supervisor.  3d is so big that people specialize.  That's why I've linked tutorials to so many different parts of Blender.  But to put together something that looks great.  That's the artistic side not technical.  And most websites don't go over that and it's very important before you open blender.

Souther Shoddy also has some of this type of advise on making your own shorts.

cgchannel
1 year ago
New $45 Maya retopology plugin transfers the proportions of a raw 3D scan to a low-poly mesh suitable for use in animation work.
Jim Thacker

3d Total
11 months 1 week ago
Warner Bros have released the final trailer for the Dune film.

The Christmas of The Little Snowmen - part 2

3d Total
8 months 3 weeks ago
Osmar Rivera takes us through the process for creating an illustration based on the snowmen, the forgotten character of the winter season, using Blender. Finish up the scene in part 2 by adding color, texture, and life!

3d Total
1 year 1 month ago
Axis Studios have created this new trailer for League of Legends.

3d Total
1 year 3 months ago
Pixar have shared this clip from their new animated film, Luca.

3d Total
1 year ago
Check out this real-time hair breakdown by Andreea Scubli on the Outgang channel.